The first traces of human occupation in Montagny date back to prehistoric times, with a cup-shaped stone described below. In Roman period, the road linking Yverdon to Pontarlier passes through the territory of the village and a milestone of the 3rd century, erected under Emperor Caracalla, was discovered there in the 19th century. This milestone is currently conserved in the castle of Yverdon. In the Middle Ages, a village and a castle grew up before it was burned down during the Burgundy war in the 15th century. 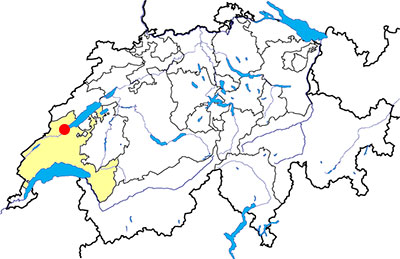 In the Planche woods to the west of the village, a small erratic block with a small sign is visible next to the forest road. This block, 1.80 m long and 1.03 m wide, has two cupules, probably dug in Neolithic style, the largest of which is 10 cm in diameter.

Overview of the stone

View of the two cupules

To the north of today's village, an important medieval castle stood on a hill overlooking the brook of Brinaz. This castle, probably one of the oldest in the canton of Vaud, was built in the 10th or 11th century. The first known owners were the Montfaucon family in 1149, then the seigneury was acquired by the Chalon family. A representative of this family, Louis de Chalon-Orange, spent a large sum of money to repair the castle in 1450. But in 1475, the region fell into the hands of the Swiss confederates and the castle was taken and burned down. It will no longer be rebuilt.

According to the publications of Victor Bourgeois (Au pied du Jura) and Ric Berger, the castle had at least four towers, only one of which is still visible. This polygonal-shaped tower still has a facade of approximately 20 metres high and walls 1.75 metres thick. Currently, it is partially hidden by the forest and ivy. At the beginning of the 20th century, the tower was in better condition and vineyards were cultivated at its feet. Apart from the ivy whose base has been cut off and which is now dry, the tower does not seem to benefit from any maintenance and we can legitimately wonder what will remain for future generations if nothing is done to safeguard this monument.

To the east of this tower, a round shaped mound is still visible in the forest. It may be the remains of a tower. A section of wall leaning against the mound is also visible. The remains of two other towers are mentioned in the above-mentioned publications.

North-west view of the tower

North view of the tower

East view of the tower

Top of the tower

Wall of the castle