The village of Vuiteboeuf and the hamlet of Peney are the last plain stage on the road Yverdon – Sainte-Croix. Vuiteboeuf and Peney have always been parts of the same municipality but they had a different evolution during the History. During the Middle ages, Peney was an important village and Vuiteboeuf was only a hamlet. They were also a stage on the Via Francigena, route of pilgrimage between Cantorbery and Rome, and also on the Via Salina, a road for salt trade between France and Bern. Then Vuiteboeuf grew up while Peney became less important. With these changes, the inhabitants decided to demolish the church of Peney and to use the stones to build the church of Vuiteboeuf at the beginning of the 20th century. A Romanesque tower, last remain of Peney church, and the ruins of a very unknown castle, are the main evidences of this long history. The historic road, which is a part of the Via Salina and of the Via francigena, is presented in the Sainte-Croix page of this web site. 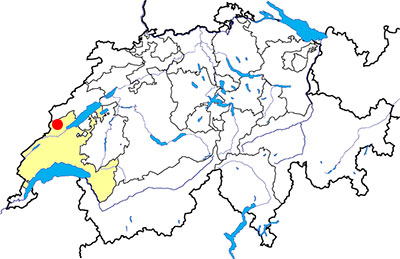 On the west of Vuiteboeuf, in the direction of Baulmes, a part of the forest is called Bois des Tours (Towers Wood). Nowadays, of no tower is visible, it was different during the Middle Ages. An important castle existed at this place, and Victor Bourgeois, in his Guide du Pied du jura, thinks it was the Castle of Peney, owned by the Lords of Grandson and destroyed during Burgundy wars. No archaeological excavation has been done on the site, but it appears with the ruin symbol on 1:25'000 scale national map.

The castle is built on two hillocks connected by an passageway. Because the whole site is covered in the forrest, it is difficult to have a good idea of the commanding position of the castle, but the relief map which is visible on the cathographic web site of the State of Vaud allows understand better the importance of the site. Victor bourgeois had the possibility to see a plan of the castle drawn in 1869, and Ric Berger used this plan to make a perspective drawing in his book Le Nord vaudois (p. 175 in 1998 edition).

The north-est hillock is a long terace on which two big round towers were built. In 1869, the walls were still visible, but now there are only depressions on their location. Vitor Bourgeois thought the origin of these depressions because of the collapse of the towers cellar. The two hillocks are connected by a passageway which is still well visible.

Nowadays, the mount at the south-west end of the castle is the most impressive visible remain. Its top is approximatly 2 meters higher than the level of the hillock, and it overhang the outside of the castle of 8 meters. It is not possible to know when this mound has been laid out, but it is possible that is older than the others parts of the castle. The position of such a mound on a hillock is quite similar to a celtic promontory fort.

Simplified plan of the castle in 1869

Simplified plan of the castle nowadays

Overview of the site

Passageway between the hillocks

Entrance of the south-west hillock

East corner of the south-west hillock

Inner view of the south-west hillock

Innner view of the south-west hillock and of the mound

Overview of the mound

South-west view from the top of the mound

View of the mound from outside the castle

Stonework wall of the south-west hillock

Nowadays, Peney, hamlet located 1 kilometer far from Vuiteboeuf, has a medieval tower in the center of a public square. During the Middle Ages, this tower was the bell tower of St Peter church, demolished in 1907. During the demolition, a Gothic window, which was in a wall of the nave, was taken into pieces and rebuilt in the wall of the bell tower. The construction of this tower is quite old because of the upper level of the arcade of the upper level are Romanseque style.

Overview of the tower

Gothic window of the east face