Between Vuiteboeuf and Sainte-Croix, it is possible to see the most important set of medieval roads in Switzerland. 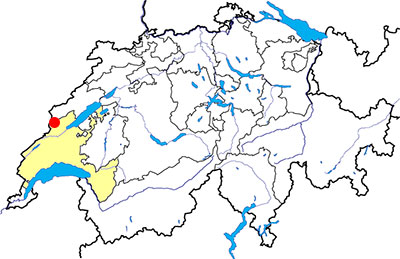 The road with ruts

Nowadays, a road winds steeply upward between Vuiteboeuf and Sainte-Croix. This road cut several times an old road with ruts, considered for a long time as a Roman road (first in Virctor Bourgeois's guidebook, then in Ric Berger's book). In fact, the visible remains are the remains of the road used between the XIVth and the XVIIIth century (see François Mottaz 's article). In the middle of the XVIIIth century, a new road is developed for the use by more vehicles thanks to a more gentle slope and more bends (the medieval road has only one big bend). Nowadays, this road is used for the forestry and has been replaced by the modern road, created in 1838.

The road was part of two importants ways, the Via Francigena and the Via Salina. The Via Francigena was a pilgrim route betwenn Canterbury, in England, and Rome with stages in Reims, Pontarlier, Lausanne and Great St Bernard. The Via Salina was a commercial road for the salt trading betwen France and Bern. During the Middle Ages, two castles were established near the road with ruts. In the way Yverdon - Sainte-Croix, the first one was in the territory of Vuiteboeuf (see the description of The "château des Tours"), and the second one, which have very few visible remains, was at the place of the hamlet called Château de Sainte-Croix. After the village of Sainte-Croix, in the direction of France, there was a third medieval castle, at the so-called place Franc-Castel, where the only visible remains are the ditch in the pastureland.

Repaired section in 1712 and remains of an older road

Located in the town center of Sainte-Croix, this museum owns an interesting archaeological collection. The objects were discovered at different sites in the area (the Covatannaz gorges, Franc-Castel medieval castle, the Gallo-Roman sanctuary at Le Chasseron).