On the west of the city of Orbe (VD), the village of Montcherand is situated on a hill, around a medieval church. This church has one of the oldest visible murals in Switzerland for the Romanesque period. 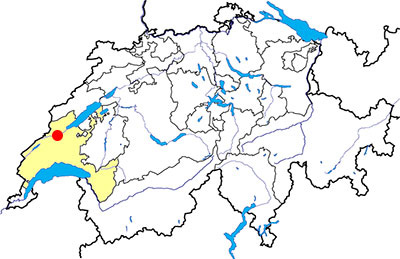 During the Middle Ages, Montcherand was in the crossing of three routes of pilgrimage : the one of Santiago de Compostela ; the Via Francigena, connecting Canterbury to Rome ; the third road is a part of the network of Clunisian sites. A Clunisian priory is built during the 11th century above the ruins of a chapel built in the 10th century. This priory depended on the priory of Baulmes (VD), then, since the 12th century, on the monastery of Payerne (VD).

The mural painting of the choir is realized during the 12th century. This fresco is visible up to 1536, when the Protestant reformation replaces the Catholicism in the area. A windows is pierced in the apse and a white shade has covered the whole painting. The fresco is released in 1902 and it is restored in 1902, then in 1971-1972. It has its current aspect after a last restoration in 1991-1992.

The upper part of the mural painting shows Christ in majesty, surrounded by the four animals of the evangelists. The figure of Christ is very fragmentary and the only still visible animal is the winged bull of Luke, on the right and bottom side of Christ. The lower part shows the College of the Twelve Apostles, in which there are Paul and Mathias, as well as a central and not conserved character (Christ ? The Virgin ? Magdalen ?). Six apostles are conserved on the right with their names, and four apostles are partially visible on the left.

Overview of the church

Choir of the church

Choir of the church before the restoration in 1902

Choir of the church after the restoration in 1903