Orbe is a small city crossed by a river which has the same name. The oldest remains left by humans are dated of the Neolithic Age. A Celtic house has been dig up at the so-called place Bosceaz, and several Roman settlements are knwon in the area, such as the one at Montchoisi, knwon by the prospections, and mainly the one at Bosceaz, which was the biggest Roman farm knwon at the North of the Alps.

If the history of Orbe during the High Middle Ages is knwon with several texts, its archaeological past during that period has let few remains. The city grows up arround the castle, then it is protected y a city wall during the 13th century. At the 15th, the city is taken by the Confederates and the the castle is burn. At the 18th, a tower of the city wall is transformed into a hospital. 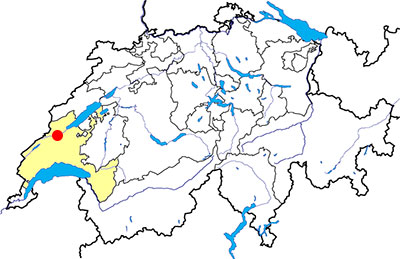 To the north of the present town of Orbe, at the place knwon as Bosceaz, there was a rich Roman villa (farm) built between the second and the third century AD. The living quarters of the owners were organized around two big squarred court yards. Some rooms were decorated with mosaics (10 are known in the living quaters) and murals. Private bath and a mithraeum (temple consecrated to the oriental god Mithra) were also part of the farm.

Between 1986 and 2004, the place was the teaching-site for the students in archaeology of the University of Lausanne, which organized excavations there. During these excavations, here are the most spectacular discoveries: in 1993, the ninth mosaic; in 1996, the mithraeum; in 1998, the baths.

Nowadays, only 8 mosaics, in small houses, are open for public visits. The modern reception pavillon, with a permanent exhibition, has been opened in 2010. The restoration of the last mosaic is finished since 2011, and a new temporary protection pavillon has been built in 2015, but it is open for the public only when there are open days events or colloquiums. Its permanent aperture for the public as well as a more complete presentation of the other structures will be possible only after a complete developement project of the site

Via Storia, an free application available on thevApp Store and Google Play, gives an interactive visit of the site. It is also possible to rent on site a tablet with the application.

In 2019, as the State Council of the canton of Vaud only finances the strict minimum for the maintenance of the site, and as it currently does not provide any funding for the opening to the public and for the developement project, visits can only be made during the week-ends in July and August or on request to the Orbe tourist office

View of the reception pavillon

Overview of the mosaic n° 2

Detail of the mosaic of the Triton (n° 4)

Overview of the mosaic of the Labyrinth (n° 5)

Detail of the mosaic of the "Cortège rustique" (n° 6)

Overview of the mosaic n° 7

View of the mosaic of the Divinities (n° 8)

Detail of the mosaic of the Divinities (n° 8) : Mars

Detail of the mosaic of the Divinities (n° 8) : Venus

Detail of the mosaic of Achilles at Skyros (n° 9)

View of rooms with terrazzo ground

Overview of the baths

Orbe keeps several medieval buildings, and the main visible ones are the curch, the castle ruins, some elements of the city wall, a mill and a bridge.

Nowadays, the castle esplanade is a public square dominated by two old towers. This esplanande exists since 1835, when several towers of the castle have been destroyed and a terrace has been built ont the north. In the centre of the east side of the esplanade, the squared tower has no longer its coping stone and its floors.

On the east, the round tower was the castle keep. A piece of beam allowed to date the construction at 1232-1233. The top of the tower is transformed in at the beginning of the 14th century. In 1475, the timber frame is destroyed during the siege and the fire of the castle by the Confederates. During a long period, up to 1870, the top of the tower becomes the support of a stork nest.

If the original door of the tower was 10 metres above the ground, it is possible to enter through a modern door bored at the ground level, and to visit the different floors. From the top, there is a beautifull view of the city and the plain.

Overview of the round tower

Overview of the square tower

Top of the round tower

Top of the square tower

Located at the south of the castle, the parish church has a tumultous history. The first building built there was a chapel dedicated to Notre Dame during the 12th century, but the archaeological excavations didn't allowed to confirm its existence. After a fire, the church is rebuilt at the beginning of the 15th century with a nave and two side aisles, a chapel on the north-east, and the reuse of a floor of city wall tower as chancel.

In 1475, the fire which damage the castle destroyed also the church, and it remained only the outside walls and the chancel tower. The building is rebuilt with masonry vaults and pillars, and three chapelas are added. In the 17th century, a new fire damage the church, and the side chapels are transformed into side aisles during the renovation.

Overview of the church

Inside view of the church

Vault of the nave

Painting of a window

It remains several elements of the city wall built during the 13th century. The bell tower of the church was a part of it. Near the old school, the Bernard tower, a round-shape tower, owns a timber frame dated from the 15th century.

If both towers aforementioned have always been visible, a third tower was studied beween 2012 and 2013. Built in the south of the city, the abbey tower played a defensive role between the 13th and the 15th century. In the 15th centutry, transformations are done to in order to be the tower fit for habitation, then, between the the 15th and the 19th century, annexes are built around the building. In the 18th century, the tower and its annexes became the first orthopaedic hospital in the world. Since 2012, the annexes are demolished and the medieval tower is classified as an historic monument. This tower, nowadays a housing, is a private property and cannot be visited.

Located in the city centre, the museum shows various objects dating from the Neolithic Age up to nowadays (scale model of the Roman villa, paintings,...) about the local history. The visits are on demand at the tourism board.

Nowadays, the buildings on the left bank house a museum, Patrimoine au fil de l'eau, dedicated to the industrial history of the region and various cultural activities are offered. You can still see part of the walls of the medieval mill. Although this part is listed, the museum is threatened by a real estate project. The buildings on the south shore, which are not classified, will be demolished.

Scale model of the mill at the end of 20th century

Located next to the Moulins Rod, the Moulinet bridge is currently the oldest in Switzerland that is open to traffic. Its construction began in 1421 on the initiative of a hermit who lived nearby, and was completed in 1424. This single-arch bridge has retained its original appearance, except for the addition of metal reinforcements installed around 1880.

Overview of the bridge since Moulins Rod