Situated between Jura and Neuchâtel Lake, the village of Concise possesses on its territory the only visible dolmen in the canton of Vaud. This dolmen is in the North of the village, on a small terrace between the highway and the vineyards. 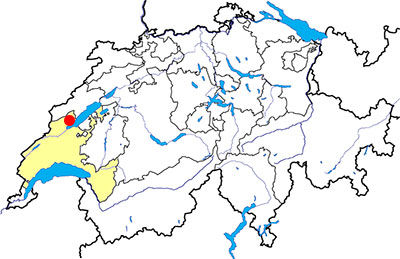 The dolmen at Praz Berthoud

The prehistoric monument was discovered in 2000, during the excavations preceding the construction of the motorway. Three paving stones were dug up, as well as five pits organized as a U-shape of 3.50 m on 3. The space bounded by pits was interpreted as being the funeral chamber as remains of human bones were found there. The study of the fragments of ceramic and the analysis in the carbon 14 of one of the bones allows to date the use of the grave towards 2300BC.

The monument was restored in 2010 a few meters away from its location with the original paving stones and also three modern paving cut in the granite of the Tarn.

View of the dolmen from the South

View of the dolmen from the North