The village of Concise, on the side of Neuchâtel Lake, has on its territory a Carthusian monastery and also the remains of a Roman quarry. 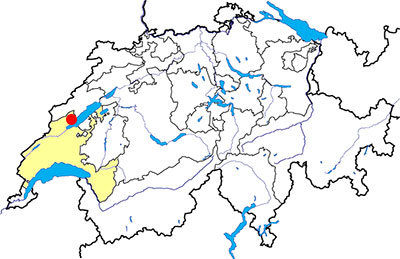 The Carthusian monastery of La Lance

The domain of La Lance is situated at the limit of the cantons of Vaud and Neuchâtel. This domain was, during the end of the Middle-Age, a Carthusian monastery whose monastic activity stopped after the arrival of the Reformation in the area during the XVIth century. It is possible to see the only intact medieval cloister in the canton of Vaud.

The Carthusian monastery of La Lance has been founded in 1317 by Pierre of Grandson, lord of Belmont, to seal the new peace with the lords of Neuchâtel, and also to be the familial necropolis. A small community of monks settle there and occupy the domain until 1539. After the Reformation, the domain is secularized and the property is sold to private individuals. The different owners will do several important transformations with the passing years, mainly between the XVIIIth and the XIXth century.

The domain of La Lance is a private property and the visits are only allowed on demand. It is also possible to buy the wine producted in the domain. For more information, please visit the website: http://www.lalance.ch

The chapel, dedicated to the Virgin, has been built between 1318 and 1328. Its plan is rectangular and its architecture is bare. It had Gothic vaults which have been partly demolished in the beginning of the XIXth century. The building is transformed into a press-house and a library at that time.

View of the chapel from the north

Unlike the others religious orders, the Carthusian monks had in their monastery two cloisters. The samll cloister had the same function as meditation place as the cloisters in the others monasteries. The Carthusian monks didn't have a common dormitory, they lived in individual cells built around the big cloister. At La Lance, the big cloister doesn't exist any more and its precise location is not known. The small cloister, placed beside the chapel, is still visible.

According to the architectural analyses, the cloister has been built during the third quarter of the XIVth century. Its ribbed vaults are Gothics. The capitals of the North gallery are the only one with a particular decoration.

Small closter: detail of a capital of the North gallery

Small cloister: start of a ribbed vault with a figure

The quarry of la Raisse

At the East of the domain of La Lance, in a clearing, it is possible to visit the quarry of la Raisse, also called quarry of La Lance. This open quarry was run during the Roman period for a yellow-white limestone, use for example to build the Roman monuments of Avenches.

Mentioned at the 18th century as a Roman quarry, the site has been damaged during the construction of the railway between Yverdon and Vaumarcus in 1857-1859, and also in 1909. Endangered because of the working resumption in 1943, the quarry is as classified historical monument in 1945. In 1997, the graves allow to clear a new work surface in the upper part of the quarry, but no remain allow to certify the working during the Roman period. The boarding ramp would have been found by Victor-H. Bourgeois 120 meters at the south-west of the visible area. An inclined plane and some column fragments were visible when he wrote his guide book “Au pied du Jura” (pp. 235-237), but it is not visible any more (note 1 (p. 238), p. 259 in the new publication of 1982).

Nowadays, it is posible to see an inclined plane in which are dug several grooves. These grooves used to delimit the blocks to be extracted. Several stone blocks still there and it is possible to see on the biggest several series of grooves. These grooves are the characteristic marks of the “escoude”, a quarry tool used for the manual extraction of soft stones (French description in Wikipedia).

Pannel at the entry of the quarry

Block in the upper part of the quarry

Grooves used to delimit the dimensions of the blocks

View of the biggest block with working marks