Situated between Jura and Neuchâtel Lake, Fresens is village which has a dolmen, and some elements of this dolmen are still visible. 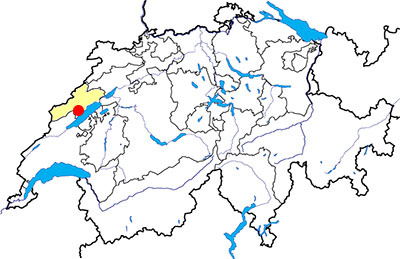 Near the top of the village, a stange stone stands on the streetside. A large hole is visible in one of its sides. This paving stone is in reality one of last vestiges of a dolmen today partially destroyed. The identification of the monument was matched in the Second World War, during a inventory of the megalithic monuments in the region.

The paving stone has at present the size of 1,3 m on 1,3 m, with an oval hole of 40 cm on 26. Originally, the paving stone was more important as the opening was in the center of the stone. Other paving stones, smaller, are below used as elements of fence. The monument was probably built during the Final Neolithic (end of 4th and beginning of 3rd millenium BC) if it is classified in the category of simple dolmen with punched paving stone of type Schwördstadt.

Others dolmens are known in the Jura mountains, such as Onnens (VD), Courgenay (JU), or Auvernier (NE), which is nowadays visible at the Latenium, at Hauterive (NE).

Overview of the main paving stone of the dolmen

Detail of the main paving stone