The North bank of the Neuchâtel Lake is a region rich in megalithic monuments, and the municipality of Saint-Aubin-Sauges has several in its territory. If the menhirs in Devens wood are known for a long time, an important set counting several menhirs was found during the construction of the highway A5. It seems as well as a cromlech was known until XIXth century. 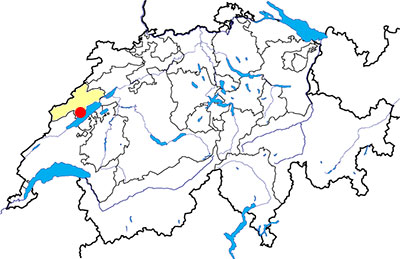 Among the visible menhirs in the Locality Devens, there are two which are easily accessible. The Pré-du-Devens menhir is situated in the middle of a field. This granite block, 1,65 meter high and 0,85 meter wide, contains two notches on its western face. In 1845, farmers wanted to bury it not to be bothered any more during the exploitation of the field, and some human bones and big pieces of pale red ceramic (according to V.-H. Bourgeois, p. 35) or fragments of tiles (according to the book D'un mégalithe à l'autre, p. 51) were found during the digging of the pit. The next year, on order of the government of the Principality of Neuchâtel, the menhir was raised in its location of origin.

At 200 meters on the east of the first monument, the truncated menhir in Devens wood is in the south-east angle of the latter. Until XIXth century, the megalith had 3 meter height with a rectangular base of 1 meter on 2, while at present the height is only 1 meter. It is possible that the block was exploited by granite-cutters to prove their fitness in the size of a hard material.

A third menhir is 300 meters on the north-est far from the latter, in the municipality of Gorgier.

Discovered in 1994 during archaeological excavations made within the framework of the construction of the highway A5, Derrière-la-Croix megalithic set is constituted by two different alignments. The first one, constituted by 4 blocks according to a southwest / northeast axis, was probably set up by the middle of the 5th millennium BC. The second contains 4 menhirs and isolated blocks, possesses a slightly different orientation, and it seems to have been fitted out at the beginning of the 3rd millennium BC. The site is at present crossed by the highway and nothing is visible on-the-spot, but a menhir as well as several objects are exposed in the visitable deposit of Latenium at Hauterive.