Situated by Neuchâtel Lake, and a few kilometers away from the city center of the same name, Hauterive is a village whose origin goes back to the prehistory. Nowadays, it is possible to visit the Laténium to discover the history and the archaeology of the region. 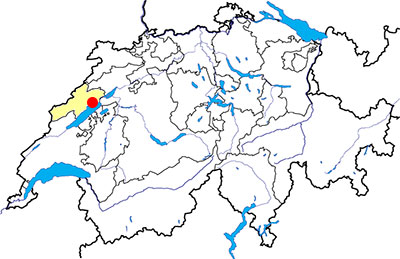 Composed of a building (sheltering the cantonal museum of archaeology, the archaeological cantonal department and the pulpit of Prehistory of the university of Neuchâtel), and a city park, Laténium is a unique set in Switzerland. Before its construction, Neuchâtel already possessed a cantonal archaeological museum, but the latter had become too small and unsuitable to present the cantonal heritage.

A first motion had been put down to the Grand Conseil (Legislative council of the canton) for a new museum in 1979. Afterward, thanks to professor Michel Egloff, the idea makes its way and a competition of architecture is launched in 1986. The chosen site is the location of a lakeside village discovered in 1983 and the reserved project is accepted in popular voting in 1996. Laténium is inaugurated in autumn 2001, and in 2003, it receives the Council of Europe Museum Prize.

In the park situated between the building and the lake, several prehistoric vestiges as well as life-size restorations are visible. We can see in particular: one of the menhirs of Treytel-A Sugiez to Bevaix (NE), dated the average Neolithic (5th millennium BC); the dolmen of Plant de Rives, resulting from Auvernier (NE), built in the Neolithic (end of 4th or beginning of 3rd millenium BC) and reused in the average Bronze Age (on 1600-1500 BC); a part of the camp of hunters of Monruz (NE), dated about 13'000 years BC. Among reconstructions, there are: a lakeside house of the end of the Bronze Age (approximately 1000 BC); three houses of the Neolithic village of Champréveyres reconstructed in the location of their discovery; a Bronze age tumulus; a part of Cornaux Celtic bridge; a Roman garden.

Restoration of a Bronze Age house

Restoration of a Roman garden

The permanent exhibition of the museum presents a selection of objects discovered on the territory of the canton of Neuchâtel, from 50'000 years BC in our days. Among these objects, there are: two sculptured menhirs of the group of Treytel-A Sugiez at Bevaix; various Celtic objects from the eponym site of La Tène; the Gallo-Roman boat of Bevaix; a scale model and various objects of the Roman palace of Colombier (NE); a scale model of the collegiate church of Neuchâtel.

A room is reserved for the temporary exhibitions. The visitable deposit is opened on request and it is possible to see there in particular one of the menhirs of megalithic group of Derrière-la-Croix, in Saint-Aubin-Sauges.