Nowadays, Avenches is a town with 3000 inhabitants, but during the Roman period, about 20000 inhabitants lived there. She was the capital city of Helvetia and had the status of colony since the reign of the emperor Vespasianus. The decadence of thecity began during the second half of the 3rd century and it was a cathedral town up to the 6th century.

The main visible Roman monuments are the amphitheatre, the theatre, the sanctuary of the "Cigognier", the temple of the "Grange-des-Dîmes", the palace of "derrière-la-Tour", the forum baths, and the city wall. The city was supplied in water with several aqueducts. A section of one of them is still visible in Montagny (FR). 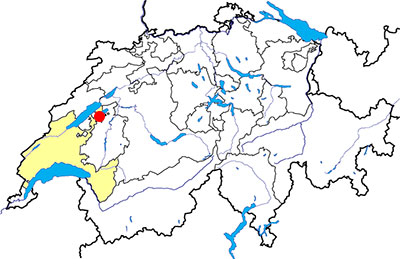 The amphitheatre of Avenches is the second biggest amphitheatre in Switzerland, it is also the best preserved. After a first building stageat the beginning of the second century AD, approximatly 9000 spectators were able to be present and to look at fights between gladiators or wild animals. After a second building stage in the middle of the second century AD, the amphitheatre had a new capacity of 14000 spectators and a monumental gate is built on the external side of the main entrance. Nowadays, the aphithatre is used for some events such as the Opera or Rock'Oz Arènes. The Roman museum is installed in the tower built during the middle age above the main entrance.

View of the amphitheatre with the tower of the Roman museum

View of the main entrance in the arena

View of the main entrance from outside

The museum is installed in the medieval tower above the main entrance of the amphitheatre. It is possible to look at a part of the objects found during the excavations of the Roman city, such as mosaics and painting walls, different statues decorating the mausoleums En Chaplix, a copy of the golden bust of Marcus Aurelius, statues elements from various monuments, several stone inscriptions. A room at the top level is used for the temporary exhibitions.

Statue of the North mausoleum of En Chaplix

The theatre of Avenches is the biggest of the four known Roman theatres in Switzerland but it is not the best preserved. Built from the end of the first century AD, 14000 spectators were able to take place in it. Facing the sanctuary of the "Cigognier", it could be used for religious as well as for profane shows.

View of the theatre from the top of the bleachers

View of the theatre from the sanctuary of the Cigognier

View of the theatre from the south

The sanctuary of the "Cigognier"

The sanctuary of the "Cigognier" has been built between the first and the second century AD. It has this name because, during a long period, there was a stork's (in French: cigogne) nest on the top of the column. The sanctuary was probably used for the imperial worship. The golden bust of the emperor Marcus Aurelius has been discovered in a waterpipe under the sanctuary.

View of the sanctuary of the "Cigognier" from the theatre

View of the column known as the "Cigognier"

View of the upper part of the column of the "Cigognier"

This small temple has been built at the end of the first century AD. The foundations of the stairs which were at the entry of the building are the only visible remains. The room in which there was the statue of the divinity is recovered by the road.

Overview of the temple

View of the stairs of the temple

Structure with columns near the stairs of the temple

Between the first and the third century AD, a sumptuous palace has been built at the place known as "Derrière-la-Tour". This palace, whose owner was probably a rich local family, had severals yards, some rooms decorated with mural paintings and mosaics (one of them, the mosaic of Bacchus and Ariane, is now destroied), and private baths. Nowadays, it is only possible to view tho rooms of the private baths.

Baths of the palace

The forum baths were one of the three thermal baths of the Roman city, and now, they are the only one which are visible; a second establishment is waiting its restoration. Two of the three main rooms are visible under a shed. The first room (the frigidarium) is crossed under by a aqueduct, and in the second room (the tepidarium), we can see the remains of the underfloor heating (hypocaust). The establishment has been built during the second half of the first century AD.

View of the frigidarium and of a aqueduct

View of the aqueduct in the frigidarium

View of the tepidarium

Beside the main road, near the forum baths, some walls are partially visible under the grass. These walls belong to a Roman building built at the second century AD. The plan of this building - three room side by side - allows to think that it was a Capitolium (temple dedicated to Jupiter, Juno and Minerva). Another hypothesis is that it was a temple dedicated to Minerva - whose some elements of a acrolith (stone and wooden statue) were excavated in a lateral room - with eventually two libraries. This building has been built on the site of the first forum baths, whose excavations, between 1972 and 1975, allowed to dig up the frigidarium and a part of the tepidarium.

Overview of the building

Head of the statue of Minerva

Avenches has been allowed to build its city wall when it received its status of colony, in the second half of the first century AD. The city wall has a circumference of approximatly 5,5 km, has 73 towers and several gates. The main gates are the West gate and the East gate.

View of the East gate

View of a tower of the West gate