Situated in the valley of Broye river, a few kilometers away from Avenches, the village of Vallon has a long history, and we can see there the vestiges of a Roman establishment, with two of Switzerland's most beautiful Roman mosaics, as well as a medieval church. 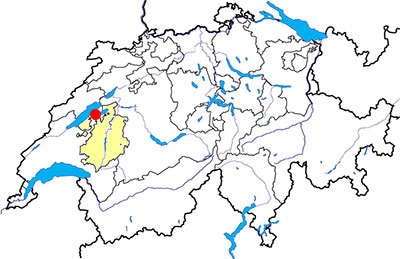 In the locality On Dompierre, the Roman museum shelters the vestiges of an establishment decorated with two magnificent mosaics realized between the second and the third century AD. The mosaic of Venatio is at present the biggest Roman mosaic preserved in Switzerland.

The remains of a human occupation of the site dates back to 1970, followed by excavations in 1980-81. In 1985, excavations prior to the construction of a villa allows to the discovery of two medallions of the Venatio mosaic. The site has been declared of national importance in 1986 and excavations are organized during the next five years. Mosaic of Ariadne and Bacchus is excavated in 1989 and the entire Venatio mosaic is excavated in 1990. The research continues until 1994, then from 1998 to 2000 during the construction of the museum. Further excavations took place in the 2000s to better understand the organization of the gardens of the Roman villa.

There was a human occupation before the Roman period. The human presence is attested since the Bronze Age and early Hallstatt period, between 1100 and 800 BC, and during the second Iron Age. The first Roman building ,of modest size, is built at the beginning of the first century AD, and two buildings were added at the middle of the first century. During the second century AD, the central building is completely rebuilt and the mosaic of Ariadne and Bacchus is established. Other transformations take place subsequently, as the layout of the room and baths with the Venatio mosaic. Towards the end of the third century, a part of the buildings are destroyed by fire, and during the fourth and fifth centuries, the site is partially occupied before being phased out.

The Bacchus and Ariadne mosaic is composed of a honeycomb mat with three central medallions depicting two loves finding Ariadne and a satyr. Other médaillaons exagonaux represent theater masks, face three women and floral motifs. In the apse, two panthers around a crater.

The Venatio mosaic is composed of a honeycomb mat and surrounded by a border of floral motifs. Ten medallions show the main actors of a venatio, organized hunting in an amphitheater. You can see in particularseveral gladiators, a deer attacked by a hunting dog, a bear, a bull or a tamer managing a lion towards a runaway doe.

Built on the site of a the Roman villa, the museum houses both mosaics and some of the objects found during excavations. We can also see many restored frescoes and a scale model of the property at its peak. A room for temporary exhibitions and a café are also present. Various activities are organized by the museum, including a Roman feast on the location of the Roman villa gardens.

Overview of the Roman museum

Located on a cliff overlooking the Roman villa, Carignan church has a long history. The first known building in this location is a mausoleum built in the late fifth century AD. In the sixth century, the mausoleum is replaced by a square church with apse and several appendices, including a baptistry. Towards the millennium, the church was rebuilt with approximatly the same map of the previous one. Transformations taking place in the Gothic period (extending the nave), in the sixteenth century (modification of the choir) and 1936 (modification of the nave). An information panel on site indicates the different phases of construction and excavations carried out between 1981 and 1997.