Perched on Lavaux slope, Saint-Saphorin village is quite old. The site is already occupied during the Roman period, with several constructions built at that time. A rectangular building, interpreted as a fanum, is discovered, and then destroyed at the XIXth century. Another Roman building has been discovered under the actual church. In 563 AD, a tidal wave, caused by the Tauredunum landslide, destroyed Glerula village. After this disaster, the village was rebuilt at its actual location. 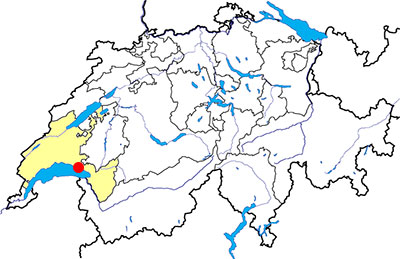 Saint-Saphorin church, with its characteristic steeple, has a long history. This history is known with the excavations made in 1968 and 1969, followed by the investigations made in 1984, 1985 and 1991. A part of the remains of the oldest buildings are visible in a small archaeological crypt, made under the nave of the actual church and accessible with a stair from inside the church.

On the first century AD, a rectangular building is built in stonework. It is divided into two parallel rooms, and it remains several walls and vestiges of stonework floor. Then, a third room is built to the west of the northern room. The function of this Roman building is not sure because of the lack of evidences about its interpretation. It is possible that it was a mansio or a house.

Between the 4th and the 5th century, the building has several transformations (extension on the north, creation of a lowered transversal passageway in the northern room) and becomes a christian mausoleum. Between the 5th and the 7th century, a stair is built to access at the transversal passageway (the first access was from the southern room, lower than the northern room), as well as an extension at the west, which could be a portico continuing along the northern side of the mausoleum. The building becomes a memoria (commemorative funeral building).

At the 7th century, a semi-circular apse is built on the eastern side of the northern room, and the memoria becomes a church. Several graves are dug in the old northern room (which is the nave of this church) and in the northern portico. Three sculpted capitals, discovered during the excavations and dated of the 7th century are attributed to this first church.

The church has some transformations (displacement of the west facade wall, construction of a steeple on the south-west) before its complete destruction at the 16th century and the construction of the current church in 1520. The new church, in the Gothic style, has the same orientation of the old one and the surface is a little bit greater. It consists of three naves, and its steeple is built on the north-west.

Roman remains are also visible outside the archaeological crypt and inside the church. A mile stone, with an inscription dedicated to emperor Claudius and dated of 47 AD, is nowadays used as a pillar in the first bay. It has been discovered in the territory of the village, and it is one of the oldest mile stones fund in Switzerland. Another visible inscription is the altar dedicated to goddess Fortuna Redux. Probably reused during the construction of the first church, it is an evidence of a Roman sanctuary in the area.

West facade and steeple of the church

Inside view of the church

Overview of the archaeological crypt

Detail of a Roman wall

Detail of the Roman mile stone

Detail of the Roman altar