At Pully, on the east of Lausanne, it is possible to visit the remains of a rich Roman villa. 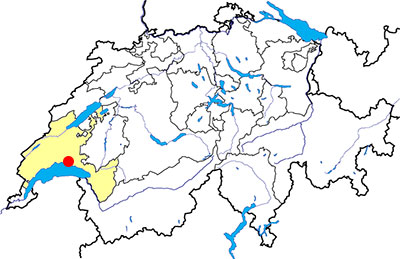 The first remains of the Roman villa have been dug up in 1921-1922 during the restoration of the church. New remains have been found during works in 1943 and in 1951. It is in 1971 that the remains we can see nowadays have been discovered. The importance of this discovery (walls preserved with a height of several metres, mural) encouraged the authorities to protect the remains and to present them to the public. The present museum is open since 1981. Since 2016, the museum is part of the ArchéoLab and is used as a exhibition room. The other part of the ArchéoLab is a space, on the other of the street, where various activies for families and schools are organized.

The first construction step of the villa is during the middle of the first century AD. It is during the second century that the villa is enlarged among others things, with the double hemicycle which is nowadays visible. Then the building is progressively abandoned between the third and the fifth century.

The visible remains are a double hemicycle open in the direction of the lake. The mural was on the inner face of the internal hemicycle. It shows a chariot race on the lower part. The upper part is unfortunately not preserved.

View of the Prieuré Square

View of the walls of the hemicycles