Capital-city of the canton of Vaud, Lausanne has several testimonies of its long history. If some monuments, such as the Gothic cathedral, are well-known, others such as Vidy archaeological walk or Ale tower, are also interesting. 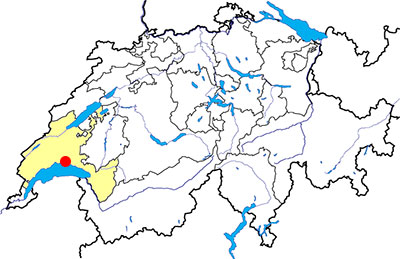 The oldest housing remains on Lausanne territory are back to the Mesolithic Age, with the presence of fireplaces and tools. Several lakeside villages are known in the area, and the presence of a necropolis used between 4200 and 3300 BC and also several megaliths at Vidy prove the human presence during the Neolithic age. Bronze age graves have been also discovered.

If a Gallic oppidum has been probably built on the Cité hill, it is at Vidy that most Celtic remains are known. Some housing remains as well as a small necropolis are dated of 2nd century BC, and housing, military warehouse or fortifications remains dated of 1st century BC have been studied.

A Roman town grows up at Vidy since the end of the 1st century BC, firstly with buildings built in wooden and earth, then in masonry. This town, known as Lousonna, is progressively abandoned since 3rd century AD and the population goes on the Cité hill. At the 6th century, Lausanne becomes the seat of the regional bishopric instead of the old capital city of Roman Helvetia, Aventicum (Avenches, VD). During the Middle Ages, the city grows up and have a masonry city wall. In the 16th, when the Protestant worship becomes the official religion, the seat of the worship is moved to Fribourg (FR).

The menhir at Vidy

At 29, route de Chavannes, a big stone block is sheltered by a tree near an administrative complex. There is no visible informative panel, and only the name of the restaurant of the complex, the Menhir, evokes the existence of a megalith in the neighborhood.

The menhir has been discovered during the excavations organized by the archaeological institute of University of Lausanne in 1985. It was lying in a pit, with another broken menhir, a few meters far from its actual position. It is not possible to have a precise datation of the megalithic monument because of the lack of objects discovered in the neighbourhood, but it is possible that it was built during the Neolithic age, like the menhirs at Lutry (VD). A Celtic sanctuary is built on on the same location, as well as a Gallo-Roman sanctuary, and the Roman temple partially covered the menhirs pit.

After the construction of the modern administrative complex and its access path, the menhir is set upright at its actual location.

Overview of the menhir

The Roman town of Lousonna raises at Vidy since the end of 1st century BC. This vicus had several public buildings such as a forum with central square, temple and basilica; several sanctuaries, a theatre, public baths. The water supply was provided by a small aqueduct and several wells.

The first archaeological excavations are made during the beginning of the 20th century, but it is only since the 1930's that scientific research is more frequent. Between 1960 and 1964, large areas are quickly excavated before the construction of the Lausanne-Geneva motorway and the developments of the national exhibition in 1964. Several excavations are organized during the second of 20th century, and the place is several times the school-site of Lausanne University (between 1983 and 1985, since 2013).

The archaeological path is a delighted path for a large number of people in the area. It has been developed during the 1970's, after the dismantling of the national exhibition. During the installation of that exhibition, a certain number of Roman walls were protected, but some others had been destroyed. The preserved walls have been restored, and concrete walls have been built on the location of destroyed ones.There are the visible remains of the forum with the basilica and a Gallo-Roman temple, a sanctuary, several houses and a port facility.

Warehouse: since the car park in the west, there is on the left a warehouse which was on the lakeside. On the right, a small public square with several constructions, and, on its centre, a building of indefinite function.

The lake: during the Roman period, the level of the lake was higher than nowadays, and a modern pond has been developed to visualize the Roman lakeside.

House and rip-rap: in the east of the warehouse, a house with a hypocaust heated room and several commercial rooms. A rip-rap is built next to that house to allow boats to dock.

The sanctuary: in the west of the rip-rap, there is a sanctuary built in several stages. Three chapels dedicated to Neptune and Hercules are in the centre of a court.

Side street: on the north of the sanctuary, the main side street (cardo maximus) of the town, with a portico on each side, and houses.

Forum basilica: in the west of the sanctuary, the basilica was an important building: it was 69 meters long and 17 meters large. The nave was divided in two parts by a row of columns built on square pillars. The north facade is lined by a series of premises with commercial vocation (shops, offices), that one should be the office of the corporation of the boatmen (nautae) of Geneva Lake. A portico with columns was between the premises and the forum square. A quay with stoneware blocks was built between the lake and the south facade of the basilica.

Forum: main square of Lousonna, the forum is lined by several buildings of indefinite function in the east and in the west, and a temple in the north.

Temple: built only in the beginning of 3rd century AD, the temple was a Gallo-Roman style one (fanum), with a central room of worship (cella) and a peripheral portico. The divinity of the temple is not clearly identified (Jupiter ? Mercury Augustus ?). The temple is destroyed during the 4th century. Then the cella is covered by a layer of mortar, and a wooden structure was perhaps built on it.

A mosaic with black and white geometrical set is visible under a modern concrete shed. This mosaic decorated one of the rooms of a house discovered in 1960. It was already visible during the national exhibition in 1964, then it has been restored during the early 1970s.

Overview of the mosaic

The museum has been built at the location of the most luxurious house found at Vidy. This house has been studied during the excavations in the 1930s, then a first museum is built to protect the murals of a room. In the beginning of the 1990s, the old museum is demolished and the actual museum is built and inaugurated in 1993. An appendix is built in 2014 to shelter various pedagogical activities.

The reception and the temporary exhibitions stand in the ground floor, and there are also the room with mural paintings and a well of the Roman house. In the first floor, there is the permanent exhibition with the main artefacts found at Vidy and several scale model of the Roman town.

In the museum gardens, several walls and a well of the Roman house are visible, as well as several plants cultivated during the Roman period.

Overview of the museum