Lutry is located on the seaside of Geneva Lake, at the east of Lausanne. The village keeps several elements of its medieval past, and the visitors can also see one of the most beautifull megalithic monuments in Switzerland. 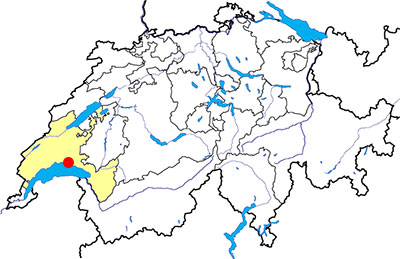 The alignment of menhirs

The alignment is formed by an alignment of steles in decreasing order, on both sides of a central stele (the menhir N°6). A menhir (N°24) is known only by the pit in which it was implanted, but it could corresponds to the menhir " du Voisinand ", discovered in 2014 to a hundred meters in the north-east. All the menhirs the summit of which is preserved had been cut with a top rounded off to give a shape of human silhouette. A single menhir (N°14) had engraved decorations. According to a recent study, these decorations were engraved in two phases. A first state gave a feminine aspect with chevrons onto sides (hair) and two encircle halfway up (breast). The second state gave to the menhir a male aspect with eyes, X shaped belt engraved, sheath and three circles halfway up. This menhir is kept in the cantonal museum of history and archaeology in Lausanne, and a copy is visible on-the-spot

The whole monument is dated at the end of the Neolithic (on approximately 2700 BC), but the menhir N°14, in its first state, is older than the rest of the alignment. The monument is frequented till the beginning of the average Bronze Age (approximately 1550 BC).

Overview of the alignment of menhirs

Oriental section of the alignment

Occidental section of the alignment