On the south of the city of Biel and on the west of the village of Studen, Jensberg hill was the site of an Helvet oppidum, and also a Roman town (vicus), whose some vestiges remains visible. Pro Petinesca association is in charge of the promotion and of the development of the archaeological site. 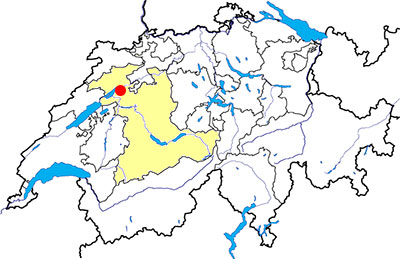 The Helvet oppidum, whose west side was protect by a murus gallicus type wall, had a estimated surface of 35 hectares. The oldest known occupation of the oppidum is during the second century BC. The defensive wall is the only visible remain nowadays.

During the Roman occupation, a town grows on the hillside and two sanctuaries groups are built inthe neighborhoud, one on the hill side (Ried) and the other one on the top (Gumpboden). During the third century, because of the barbarian invasions, the site is fortified and then it is abandoned during the fourth century.

The Gumpboden sanctuary been studied just before the second World War and a large part of the vicus has been studied during the second half of the 20th century, before the remains were destroyed by the exploitation of a gravel pit.

On the south side of Jensberg hill, several stone constructions of the roman town are still visible. It is mainly the walls of a mansio (transport café), and there are also the remains of a unfinished fortified gate, built during the third century.

South rview of the mansio

Known mainly because of the graves made between 1937 and 1938, the Gumpboden sanctuary was one of the most important Roman snctuaries in the area. Inside an irregular exagon shape wall, six Gallo-Roman temples (fana) were built, as well as three chapels, a sacred well and a building for pilgrims and priests. The oldest constructions were built during the first century AD and the site was occupied up to the fourth century.