Above Frinvillier village, the remains of the Roman road crossing the Jura mountains are still visible. 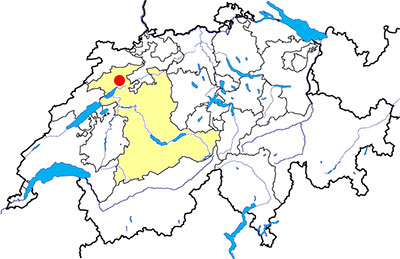 Above the village of Frinvillier, at a place called Toise de Saint-Martin, it is possible to see several meters of track ruts, vestiges of the Roman road linking the towns of Petinesca (Studen BE) and Augusta Raurica (Augst, BL), through the pass of Pierre-Pertuis.

Ruts carved into the rock, have a spacing of about 1.07 m. Remnants of steps are visible between the ruts. Research conducted in 1994 demonstrated that, at an unknown time, the path has been filled repeatedly to have a level of regular traffic.

Above the road, a niche has been carefully carved into the rock walls. A tradition dating back to the late Middle Ages sees shelter for a statue of St. Martin. There is also the assumption that the niche dating back to Roman times and has housed a statue or an inscription dedicated to the god Mars. In 1918, such inscription was dicovered in the immediate vicinity of the site and is now in the Neu Museum in Biel (BE).

Overview of the site

View of the niche carved in the rock

View of the Roman road