Between the villages of Riaz and Marsens, near the motorway, it is possible to visit the restored foundations of a Gallo-Roman temple (fanum). 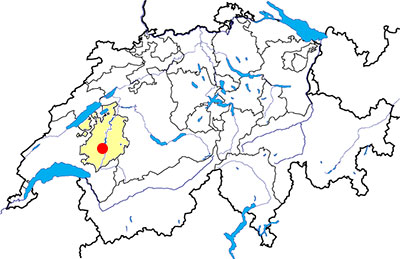 During the Roman period, the temple wasn’t isolated in the country, but was a part of a town which had, apart the houses, a public bath.

A first wooden temple has been built at the beginning of the first century AD, then a new building built in masonry replaced the wooden temple. Several pieces of inscriptions allow to attribute the temple to the god Mars Caturix. The sanctuary is destroyed during the 3rd century AD with the barbarian invasions, then the site becomes a cemetery during the 6th and 7th century.

The temple has been excavated between 1852 and 1853, and then between 1974 and 1976. As it was on the route of the future motorway, the walls have been displaced a few metres to the west. Nowadays, it is possible to look at the remains of the cella (room of worship), of the walls of the portico around the cella, and of two walls of the stairs for the access of the temple. There are also several information panels and a scale model of the temple.

Scale model of the temple

Foundations of the stairs and of the portico

Overview of the temple