In the middle of Gruyère Lake, near the village of Le Bry, Ogoz Island is a popular hiking destination with its chapel and ruined castle. In the Middle Ages, it was a peninsula in a bend of the Sarine river and there was a small town around the chapel. That's when there was the Rossens dam and the impoundment of the reservoir in 1948 that the peninsula became an island. 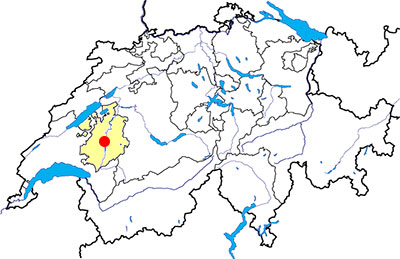 Archaeological excavations conducted in 1947-1948 and in 2002-2003 led to certify human presence on the site since prehistoric times. Several Mesolithic stone artefacts were found, and some stone objects and ceramics from the Neolithic period. Ceramic materials and stone dating from the Middle Bronze Age and also attest to the final human occupation of the site during this period. The testimony of the Iron Age and Roman times are few. The site occupation in the Middle Ages is attested by historical sources from the thirteenth century to the seventeenth century. Then the town and castle were abandoned and the buildings are stone quarries.

During the period of low-water mark, it is possible to go to the island by foot. During the rest of the year, the island can be reached by boat, and the sundays afternoon, since May to October, the Association Île d'Ogoz organizes excursions Ogoz Harbour, at le Bry.

Currently, the most striking elements of the castle are the two towers, visible from afar. The excavations in 1947-1948 have been able to demonstrate the existence of a third tower, whose foundations, make big balls till and different from the other two towers, built of sandstone, suggest a building during the twelfth century. The central tower, too small to be habitable, was probably built in the mid-thirteenth century and was linked to several buildings. The Southern tower, built between the late thirteenth and the first half of the fourteenth century, had larger dimensions but its condition does not allow to attest if it could be habitable. A building was attached to the east.

The central and Southern towers of the castle

The Southern tower of the castle

The central tower of the castle

The central tower and the main building of the castle

The chapel is the only non-ruined buildings of the ancient village. It is mentioned in the sources for the first time in 1226. Rectangular in plan, the current building is the result of several transformations. The construction was carried out mainly between the thirteenth and fifteenth centuries, with some modifications, including the development of the altarpiece was restored in 1999, between the late sixteenth and the first half of the seventeenth century.

Overview of the chapel