Located down the Jura mountain in the canton of Vaud, the village of La Praz owns on its territory one of the few cromlechs visible in Switzerland. 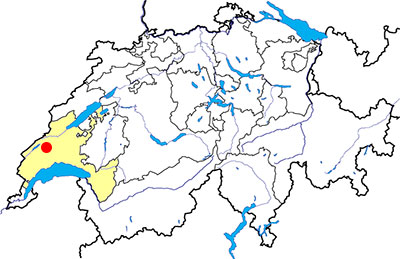 In the wood on the South-West of the village of La Praz, it is possible to see a cromlech, a stone circle built during the prehistory. Archaeological excavations have been done during the 20th century and the site is a classified historic monument since 1900.

Seen from afar, the monument has few things in common with the visible cromlechs in France, in the United Kingdom or in Portugal, and few discoveries were done during the archaeological excavations, but several elements shows that it was not a simple natural set of rocks.

The monument has an approximative semi-circle shape, and the blocks do not seem to be carved and they all have a different size. Two blocks have cup holes, small sockets made by humans and whose signification is not certain. The first block has only one cup hole, and the second block has a face completely covered by cup holes. Other stones with cup holes are visible in the area, such as the Pierre-à-Ecuelles at Mont-la-Ville.

Several telluric phenomenons specific of a human occupation are present on the site of the cromlech, and they are described in Stéphane Cardinaux’s book.

South view of the cromlech

North-East view of the cromlech

Detail of the main stone with cup holes