Nowadays capital city of Switzerland, Bern city has a multi-thousand-year history. If the old city, founded in 1191 by the Zaeringhens, is famous, the fact that the city has celtic origins is badly known. At the north-west of the medieval city, there was an oppidum in a meander of the river Aar between the 3rd and the 1st century BC. A Roman vicus (town) has followed at the same location, up to the 3rd century AD. Then, the history of the city is unclear between the abandon of the Roman town and the foundation of the medieval city during the 13th century. 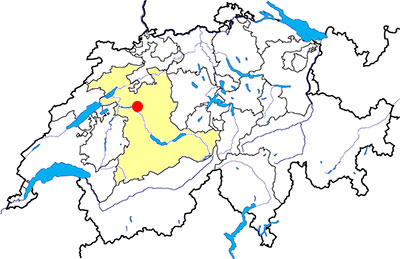 Enge peninsula, which is nowadays partially covered by forests, was the location of an important Celtic oppidum since the 3rd century BC. The Roman settlement which followed was less important and has some public buildings.

The visible ancient remains are integrated in an archaeological tour. This tour begins at Matthäus parish house at Tiefnau, where there is a permanent exhibition, and a leaflet is available there in several languages (German, English and French).

The slopes of the peninsula, overhanging several metres the river Aar, as well as the river itself, were a natural defence, strengthened by a Murus gallicus type rampart at several points. The whole protected area, approximately 140 hectares, was not entirely used for housing. In the middle of the first century BC, the area occupied by the oppidum is reduced and a new rampart is built at several locations, as the part excavated near the parish house. With the ramparts and the houses, a religious deposit and a necropolis are known with the excavations made during the 20th century.

Nowadays, the visible remains are some parts of the ramparts whose shape is like an earth mount. At several locations, the ramparts have collapsed because of the erosion made by the river. 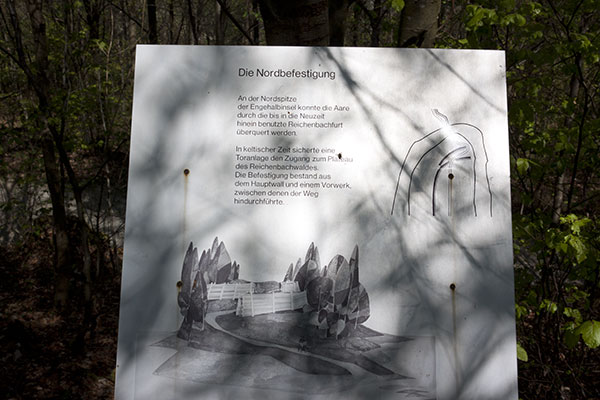 If the oppidum seems have been a quite important political and economical centre because of its surface, the Roman town was modest beside the capital city of Roman Helvetia, Aventicum (Avenches, VD). Except the houses, the following monuments were discovered during the excavations: a sanctuary with three fana (Gallo-Roman temples), a small bath building, an amphitheatre, several necropolis.

The amphitheatre, discovered in 1763 and excavated in 1956, has an ellipsis shape arena, whose axis are 28 x 26 metres, has two walls which could be an entry at one end, and a niche at the other end. Its blenches were probably wooden made. Long regarded as an amphitheatre (it would one of the smallest in the Roman empire), the building could be also a Gallo-Roman theatre (according a recent hypothesis), and the walls opposite to the niche would be the basis of a wooden scenic building. The proximity of the amphitheatre with the sanctuary is significant and it could used for various public shows (fight with wild animals, theatre plays, etc...) as well as religious ceremonies.

At the north of the amphitheatre, in the forrest, a small public bath-house is visible under a modern roof. The building, discovered in 1847 and entirely excavated between 1937 and 1938, was 20 metres long and 12 metres large. The bath-house has a cloakroom (apodyterium), a cold bath (frigidarium) with a pool, a warm room (tepidarium) and a hot bath (caldarium). The underfloor heating system is quite well preserved. 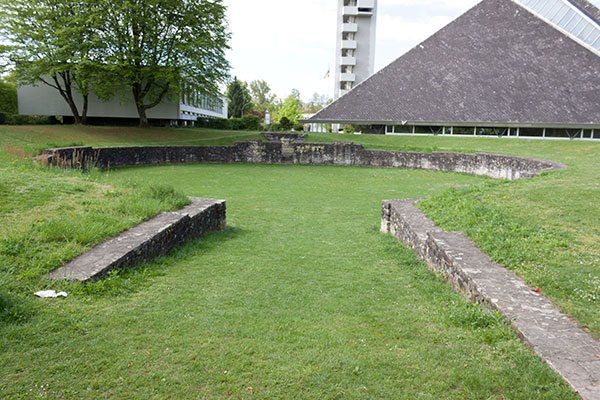 Detail of the amphitheater

Outside view of the baths

Inside view of the baths

Hypocaust of the baths

Included in 1983 in the Unesco world Heritage, the medieval city of Bern was founded during the 12th century. The west limit of the original city was the Zytlogge (Clock Tower), the first gate-tower. About 1255, a first city extension is made to the west, between the Zytlogge and the Käfigturm (Prison tower). About 1270, a second extension is made to the east, after the demolition of Nydegg castle, built at the foundation of the city. About 1344, a third extension is made, to the west, between the Käfigturm and the actual central train station. A bastioned fortification is built between 1621 and 1641 in order to replace the medieval fortifications. These old fortifications are progressively demolished during the 19th century.

If the Clock Tower and the Prison Tower are still visible, the Saint-Christopher Gate doesn't exist any more. This gate-tower, built during the 14th century, was part of the fortifications protecting the third extension of the city. Its original height was 15 metres, then it was expanded between 1467 and 1470, and the new height was 55 metres. An arched bridge was in front of the gate to cross the ditch outside the city. In 1496, a niche is created in the city-side of the tower to shelter a huge wooden statue (10 metres high) of Saint-Christopher. At the time of the Protestant Reformation, the statue is modified and it became a guardian.

During the 19th century, after the demolition of the fortifications, the gate became an obstacle to the progress for many people. After intense discussion, the gate is finally demolished in 1865; the venerable statue is cut into pieces and most of it is given to poor people as firewood, except for the head and the hands of the statue which are given to the Historical museum of the city.

Between 1971 and 1975, during the works at the station square, the remains of the medieval fortifications are excavated and put under official protection. Then these remains are restored and showcased in the underground passageway of the station square and in some shops open to this passageway. Nowadays, the following remains are visible: a part of the foundations of Saint-Christopher gate, the bridge piers of this gate, two towers and a section of the escarp wall of the fortifications of the third extension.

Part of the escarp wall

Foundations of the bridge in front of Saint-Christopher gate

In 1992, during the renovation works of the state chancellery, a well surrounded by a tower is discovered, which was partially hidden by more recent structures. This well, the Lenbrunnen, was used since since the 13th century to draw the water from the water table, and it is nowadays the oldest preserved monument in the medieval city. Dated 1252, according to the inscription on the lintel, it has been used up to the 17th century before being forgotten.

After its discovery, the well has been restored and it possible to visit it by appointment with the state chancellery. Several information panels and a small model of the monument in its original shape are visible on the spot.

Installed in a building outside the medieval city, the Bern Historical Museum (Bernisches Historisches Museum) shows many historical objects from the city of Bern as well as the territory of the canton of Berne. Among the visible objects, there are: some objects found during the excavations of Enge peninsula (see above), the small statues found at the Roman sanctuary of Thun-Allmendingen (BE), the remains of Saint-Christopher giant statue, the statues of Bern city cathedral.