On the limit between the villages of Essertes and Auboranges, a big standing stone (menhir) can be seen at the end of a rustic path. 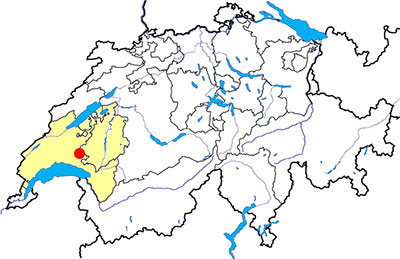 Named "Pierre du dos à l'âne", the biggest menhir known in Switzerland is located on the boundary between the cantons of Vaud and Fribourg at least since the XIXth century. For a long time, the menhir lied on the ground, half-buried, and it was considered as a simple erratic stone. During the 1990', the menhir is tudied by the archaeologists and it is set upright at its nowadays location.

Overview of the menhir

View of the menhir and of the information panel